Cycling up the Alpe d’Huez

By murraylegg
In 2015, Uncategorized
3 min read

If you’ve watched highlights of the Tour de France, the mountain s 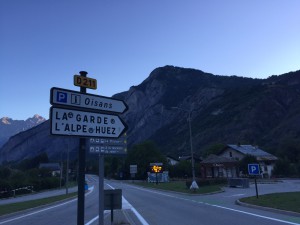 tages in the French Alps are always where the the battles are lost and won. Nicole and I have just spent a month on honeymoon in France, and on our way back to Paris from the Riviera, I jumped at the opportunity to climb the infamous Alpe d’Huez climb – to feel the burn and savour the achievement.

The stats of the climb:

I rode in the early morning, starting just before 7am, the temperature at a fresh 8 degrees. The climb starts out quite steep, and the sight of the Huez village way, way up at the top of the mountain is rather horrifying. I found it difficult to get into a rhythm, my quadriceps immediately screaming at me to call off the idea. 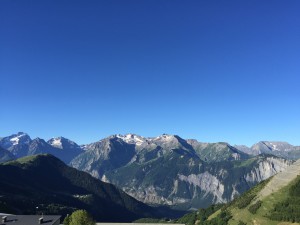 Every hairpin corner has a signboard giving details of the altitude and list previous winners of the stage of the Tour, dating back to 1952 when the climb first formed part of it. The numbers also count back from 21, so you can have some perspective on how far you’ve got to go.

Average speed settled at about 11 km/h. Marco Pantani, who holds the record for the fastest ascent, in 37 minutes averaged 23km/h. Ridiculous! After bend 6, the gradient eased from between 10 and 12% down to a steady 7.5%. People’s names and notes of support are painted on the tar almost consistently all the way up the climb. You can almost imagine the riders steaming up the climb, the crowds screaming on the penultimate day of the Tour. 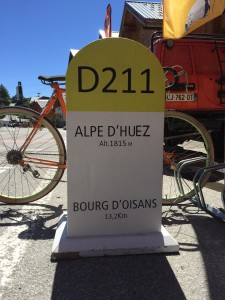 At an hour in, with a few more bends to go, the views back over the valley became quite spectacular. Snow capped Alps above you, dense green forests beneath, and the town from which I started, seeming increasingly smaller.

Reaching the top felt surreal – an mixture of appreciation for my love of cycling and seeing the world from the perspective of my saddle and handlebars, and a humbling respect for the Tour riders who climb it, often after 150km of riding, and to ascend it in such a quick time. It’s certainly not an easy thing to do, but quite achievable if you’re an experienced cyclist and have the right gearing on your bike. During the summer time, up to 800 people do it in a day.